The Pool House: Part Seven Of My Own Fixer Uppers

We decided to move again when our children were in elementary school. The decision was made when we all needed a little more room to grow.  We wanted a garage and larger space for the kids as they were too tall by then for their “play” spaces.

We realized within a short time of searching that we would get more square footage if we purchased an older home.  A fixer upper or house in need of some “tlc” would give us the most house for the money. 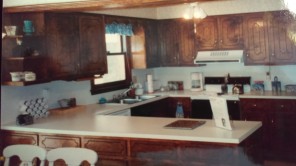 We looked at our next house once and ruled it out because it was very outdated and unappealing. When we couldn’t find anything we liked that we could afford, we decided to look at it again with a more open mind. Yes, it needed updating. The rose-pink carpeting throughout was in bad shape. The paneled walls made the space very dark and unwelcoming. The current owners’ dark and drab decor did not help us get a positive vibe .  They had a brown sofa in the already brown paneled den and a grey sofa in the living room where all the drapes were drawn over big picture windows so that it looked even more cave-like. The wallpaper throughout had been put up in the 70’s or 80’s. It was floral everywhere but looked more like grandma’s tiny prints than Waverly’s more bold up-to-date style. The kitchen cabinetry matched the ugly dark paneling in the den. It would all have to go.  On the plus side, there was a welcoming pool in the backyard of the drab cave house. Once my husband saw it, his perspective changed and his quest was to sell me on the house and convince me on the vision he saw for it. Even though he was optimistic, I did not share his enthusiasm about such a large home renovation project. It was not a good sign, he much later confessed to me, that I cried after our closing.

My ambitious husband told me he would have the whole house painted like new in three months time. Nine months later, it seemed like we had not even made a dent in our growing list of projects. In fact, it seemed as though we were taking one step forward and two steps backward on our Reno timeline for quite some time.

We started in the kitchen. My husband was able to demo the cabinetry himself, saving some of the upper cabinets for the garage for more storage space.  We hired Home Depot to design and install new bleached cabinets that were popular at the time.  That project went fairly well although the island sat in our kitchen on blocks for about three months until we could get the cabinet installer to come back to complete the unfinished job.  We had a tile man install a white ceramic tile backsplash. At the same time we remodeled our master bath which contained only one sink and a shower.  A garden tub was installed where a closet had been and the tile man put up white ceramic tile around it. Since there was no room for a double sink, we replaced the small cabinet with a larger one and a wall-sized mirror above it to make the space seem bigger. We also added cabinets above the toilets in all three bathrooms for extra storage. We installed new light fixtures in the baths and throughout the whole house to make the house appear much brighter.

We added new carpeting after some of our painting projects began so that we didn’t have to worry about paint on the floors. We had a carpenter build a new laundry room space where a pantry had been next to the half bath behind the garage. When it was time to turn on the heat as the winter began to set in, we discovered that we needed to replace one of our heating systems.  Also around this time, we had some leaks in the basement ceiling and had to have some old copper plumbing pipes replaced with pvc piping. These unforeseen expenses hit us pretty hard at the onset.  At times, we felt like we had bought a money pit. We prayed hard for the burdens to begin to lift and slowly, the first wave of repairs began to subside.

By the time we had lived in our house five or six years, we had remodeled the basement, adding French doors, a gas heater and walls to make one large room into three rooms so that my husband could have an office and I could have a craft room. In the larger area we added a pool table and seating with a tv  for the “guys” to have a place to hang out.  We finished the upstairs attic space. It became a bedroom for our son as he became a teen.  He appreciated the private space even though the ceilings were pitched. We had to situate his bed at the best angle for added head room. The last project we took on was tiling over terrazzo floors and enclosing the screened sun porch off of the den.

Things went well for several years. Around 2007, the real estate market fell into a steep decline which adversely affected my husband’s real estate appraisal business.  We started to feel the pinch in our income. After a very slow year, we fell behind on our taxes. We started thinking about selling the house. We put it on the market for 6 months to try to sell  it ourselves but got no offers for what we thought was a low listing price. On the up side, we found a house in foreclosure for a very reasonable price that we thought would meet our needs. We decided to make an offer or risk losing the chance to buy it. We thought surely our house would sell within the year and lowered our price several times. When we still did not sell it, we decided to rent the house.

We found out soon, that this was a huge mistake. Without going into too many details, the year that we had tenants was very stressful. We broke down and listed our house for sale with an agent after we had some major cleaning up to do on the inside of the home. We had two prospects within a couple of months but both fell through. FINALLY, we had a buyer who was genuinely interested in our home, wasn’t playing any games or trying to take advantage of us and gave us a reasonable offer.