The Hill House In The Cove: Part Two of My Own Fixer Uppers 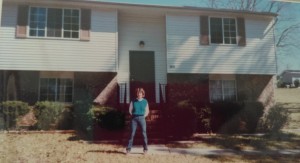 We moved to the central Carolinas when our daughter was six weeks old. We found a rental house which served little more for us than storage for all of our  belongings.  It was a split-foyer so we used the entire lower level for boxes that we never even bothered to unpack. We began a quest to find a new home right away. After much deliberation, we decided to build a house in a subdivision with a two-story one garage plan. We chose a sloping wooded lot above a creek at the end of a cul-de-sac which offered us more privacy in the backyard.

Being in a builder’s subdivision, there were a lot of things about the home that were predetermined. On the outside we got to choose the color of the siding, shutters and front door. On the inside, we got to choose the carpet, floors and light fixtures.The process was fairly stress-free and time went by quickly as we made one decision after another. By the time our daughter was six months old, our house was finally ready and we got to move in.

To place our personal stamp on the “hill” house, we did some minor things to it. One of these was some landscaping.  We planted shrubs and trees in the front yard. Our decorating budget became drastically reduced, however, during that first year when my husband’s job was phased out. We managed to scrape together enough funds to finish off a small corner of the oversized garage for a home office. This gave my husband a private space to draw maps and sell real estate so that we could pay our bills for a while. 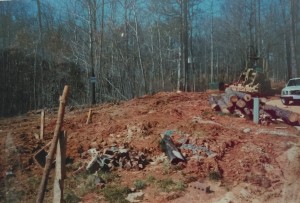 We ended up moving to northern Georgia for another job and sold the house. We did not make a profit on it. In fact, the economy was in a downturn. Though we considered renting it out, we finally  accepted a low offer to keep from having to pay two house payments. We found out later that the people who bought the house after us, fenced in the back yard only to lose the fencing later during floodwaters in a heavy rainstorm.

In this house our daughter celebrated her first birthday. She had her first sugar rush with cake and ice cream. She took her first steps and spoke her first distinguishable word, “fluffla”or flower, in our front yard.  She climbed out of her crib in the middle of the night, frightening us so much that we ended up putting her mattress on the floor.  I locked myself out of the house one day while she was asleep in her crib and had to borrow a neighbor’s phone to call my husband to come home.  She fell down the stairs here learning to climb them and cut her lip.  She got her head stuck in the railings dividing the kitchen from the den. The house was memorable in many ways but mostly for milestones associated with our daughter’s first year of life. 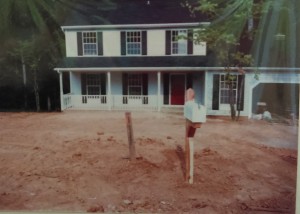