A Taste Of The Country

Last weekend, I travelled with my mother and daughter to the Blue Ridge Mountains of Virginia. My mother is delighted anytime we take her near her childhood home of Christiansburg. I searched the internet for bed and breakfast accommodations near Abingdon and discovered an 1880’s farmhouse that sounded idealistic.  We have taken risks before by staying in unfamiliar places. Sometimes it has worked out to our advantage but other times it has been disappointing.

I spoke to the owner of the farm when I made my reservations. She warned me that the farm is difficult to find in the evening because of the dark and winding mountain roads.Our goal was to arrive well before sunset.  However, we were not prepared for an hour-long delay travelling through Charlotte last Friday afternoon due to a traffic accident along the interstate.

We arrived in Abingdon just as the sun was setting. I phoned the farm-owner. She said we were about twenty minutes away. She gave me directions and said she would have the lights on.  The travel time seemed longer than what we anticipated and the road was DARK! Finally we reached the church where we were to make a right turn but we were unable to find road signs leading to the farm. Fortunately, the lady had parked her car at the bottom of a hill. She stopped us and led us up the road leading to her farm.  When we parked, we could make out only a shadow of the farmhouse. She got out and led us by  flashlight along a sidewalk towards the house. She warned us of a metal boot scraper that was imbedded in the concrete just outside of the gate.

She showed us around the inside of the house.  It was filled with interesting antiques and portraits of her family. The house had been updated with a modern kitchen. There was a living room, dining room, family room and bathroom downstairs. 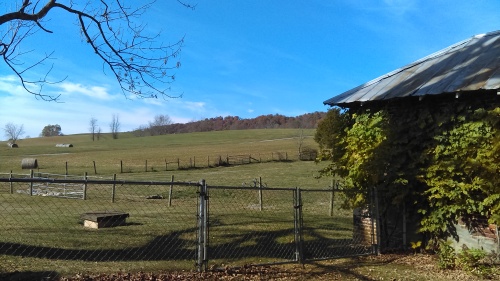 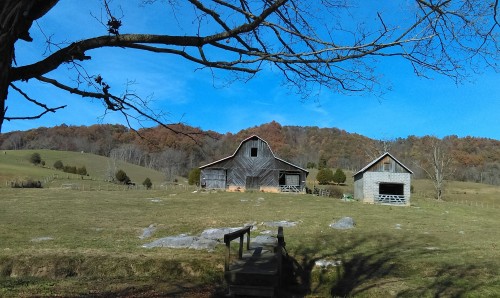 Upstairs were four bedrooms and an additional bath with a claw foot tub that had been added to the original house. We were very comfortable because each of us had our own room.The only drawback was that there were four steps down from the landing to reach the bathroom.  In the middle of the night it got very dark in the house so we had to set up lamps near the stairs so that my eighty year old mother could find her way down the steps.

We went to bed early as we were tired from the trip. We were excited to sleep in old beds covered with beautiful antique quilts and soft down filled pillows. It was easy to fall asleep in such luxury. However, the real delight came in the morning when we peered out our bedroom windows and finally beheld the surrounding countryside.  We spotted cows and horses grazing in pastures of rolling hills with distant mountains behind them. Barns and sheds near the house seemed to beckon for us to explore them.

We excitedly ventured downstairs into the kitchen and discovered a vase of yellow and red roses on the table and a basket full of delicious breakfast treats.  Our hostess had bought pumpkin doughnuts and apple bread from a bakery in nearby Bristol. She had also tucked an assortment of fruit, cereal and coffee in the basket.  We felt very pampered and were delighted to get a taste of the country for a weekend.