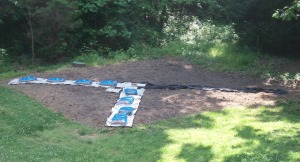 We finally did it! We were tired of looking at the weeds in the back corner of our yard that had slowly grown wild since we moved into our house almost five years ago. It has been one of those projects we kept saying we would get around to one day. It seemed too overwhelming to take on. I never could do it alone. My husband works long hours and never has energy for big projects anymore so it was one of those things that got put on the bottom of the “honey-do” wish list. We decided to hire some help.

I should have taken a before picture so you could see how overgrown the garden plot had gotten. Trust me, it was a mess! A friend’s husband cleared the garden plot and tilled it for me. He is Peruvian and speaks broken English.  My daughter attended college with his wife. They live in a nearby community and have stayed friends. Last summer, Amanda travelled with them to do mission work at his family’s church in Peru.

My new  yard guy does gardening the way he did it in Peru.  He uses a machete to clear out debris. He does it faster than anyone I know working with power equipment.  Coming from the jungles of Peru, he has seen a lot of jungle creatures of the slithery sort.  Those things do not bother him like they scare me.  He told me he killed 4 snakes as he was clearing my garden.  Two were small and two were of average size.  He showed me the smaller ones. One appeared to be a copperhead. It was greyish with brown markings.  That’s all I need to know. A snake is a snake and I don’t want them around. My Cavalier would probably try to kill and eat a snake as she does the lizards on my back porch so I have avoided letting her go near that section of the yard. I feel much better now knowing those snakes are gone.

I began laying out landscaping fabric to make walkways through the garden. I  added newspaper for an additional weed block. I used man power to carry bags of mulch into the garden since it is at the bottom of our hilly backyard.   We spread out the mulch on top of the landscaping fabric.  I used 100% cedar shavings as it is supposed to be a deterrent to insects. I am trying to go as organic as possible. Next came the stepping stones and rounded edgers for a circular bed in the middle of the garden. I plan on making this area the herb garden. I will have four quadrants in the rest of the garden, two for flowers and two for vegetables.

I will keep you posted on the progress of my garden.